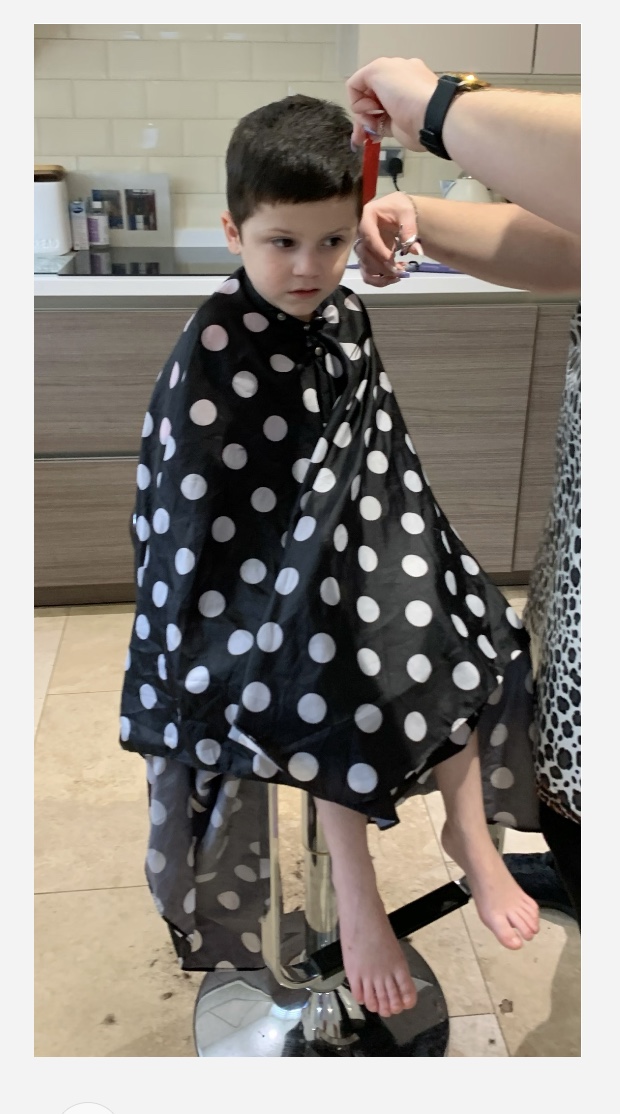 Franklin’s haircutting experience has been traumatic, to put it mildly, for all parties concerned.

He has never coped at all well in any new environment, new situations, or where he isn’t 100% comfortable. He is highly sensitive to it, to the point it completely overloads him. Taking him to the hairdressers involves a new location and new people, but also for Franklin it involves new smells, unusual noise, the feeling of a new chair… and then scissors coming at him – it’s basically rolling all of his worst nightmares into one. We attempted it twice and couldn’t get him further than the salon door!

We tried taking on the task ourselves at home, “it’s easy to cut boys hair” said his Dad with far too much confidence. More fool for me for believing him.. he butchered it! Never again! I’ve attempted quick trims myself when he’s fallen asleep on the sofa, terrified he’s going to jolt awake and lose an ear.

Franklin needs his hair kept short too. He twists and pulls it for sensory stimulation and actually gave himself a bald patch once due to this.

We decided to go down the mobile hairdresser route, feeling that being at home gave the highest possible chance of success. It’s where Franklin is the most content, relatively speaking. I just needed to find a patient, understanding and efficient (quicker than lightning!) hairdresser. My prayers were answered.

After the first visit from her to our home I apologised to my neighbours afterwards. It was ear-splitting hell.  Trial and error has led me to realise it’s not the actual cutting that causes Franklin such extreme distress. He can just about tolerate the cut with enough planned distraction and speed, but as soon as the tiniest millimetre strand of hair lands on his face or neck or hands, it’s like he’s being tortured, and he screams, cries and fights his way out. The sensation of it is utterly unbearable for him.

To prevent all risk of this we now wrap a large cape around him (he wouldn’t tolerate this initially, we’ve phased it in). Throughout the entire cut I stand in front of Franklin armed with the hairdryer and on a cool setting,  continuously blow it onto his face, hands, neck etc ensuring I can blow any tiny hairs off immediately, plus he likes the white noise. Win win.

Every visit from our wonderful hairdresser has gradually gotten that little bit easier and less hair-raising (🤣 sorry) each time. Perseverance is everything! Franklin’s tears faded. He fought with less intention. Undoubtedly we’ve worked up to this point for almost 3 years but I think I can now safely say, we’ve just about nailed it!

Today, when Terri arrived, he walked straight over to the chair, climbed up onto it, and sat happily while she gave him a trim ❤️