With Franklin’s birthday approaching, my thoughts go back to what we did last year.

Your child’s birthday is usually such a magical day, filled with fun and excitement. Unfortunately this isn’t quite the case in our house. Not when it’s Franklin’s birthday anyway. What if your child doesn’t understand it’s their birthday or what a birthday even is? What if he hasn’t the slightest interest in presents or toys generally and doesn’t like doing anything different? We could just stay at home with the family, of course we could, nothing wrong with that, but last year I was determined to have a party to celebrate his big 4!

Some people may question why we do it, why put him through it if he isn’t going to enjoy it? Maybe it’s something within me, a stubborn determination that keeps pushing me forward, or maybe it’s really about learning to dance in the rain. My belief is if it doesn’t work out and Franklin was the slightest bit unhappy we’d just leave, no harm done, no biggie, the other children could enjoy the party and at least I’d know i’d tried. If he enjoys 2 minutes of it then it’s worth it to me and who knows, it might make it that little bit easier for him to go to his friends parties in the future. That little less scary.

I want Franklin to have friends and having friends means making an effort. As much as I’d love nothing more than to wrap him up in cottonwool forever, I know I have to put him out there. If he doesn’t spend time with people, how can he establish friendships? Friends don’t happen by accident. We all make friends – a mutual affection where we show kindness, love, honesty and trust. Each friendship needs nurturing – we choose to make that effort for our friends, it’s a tried and tested formula. I want people to want to make that effort for Franklin, and for that to happen they need to see all the amazing qualities he has to offer. How awesome a friend he could be.

We picked a small indoor play centre for the party, the main reason being it would never be too busy, but also because it was run by parents who understood we might not want the ‘traditional’ and we didn’t have to explain ourselves too much. ‘What do you mean he doesn’t want party games?!!’ ‘No party music, are you mad?!!’

We visited almost every weekend for a good 12 weeks leading up to party day. This was crucial. The first few visits he was unsettled and upset, so I held him in my arms for most of the visits while his sister ran around enjoying herself. Franklin is very visual; the more he sees something and commits it to memory, the more comfortable he becomes with it – and if he isn’t comfortable, he refuses to walk. We didn’t stay long initially and we timed it well, only visiting when we knew it was a quieter session. Visits 4-8 we saw progress. After an initial reluctance to go in each time, he was starting to enjoy a few parts of the soft play area when he got in there. We stayed a little longer each time, always trying to leave on a high, with a positive memory and not push our luck!

I took photos on my phone of inside the venue and showed them to him regularly at home. The visual reminder was very effective.

By visit 8-9 onwards we pretty much had it mastered. Franklin was even happy to walk in by himself and not be carried! Unheard of! Yaay for my back! He played happily in the soft play area with his sister, he enjoyed climbing up the padded stairs and then back down again, over and over and over again. He’d found a soft beanbag seat where he took himself off when it got a bit too much, but mostly he giggled, he ran and he bounced around. Hurray!

I bought him a new shirt for his party. Occasionally Franklin can be particular about clothing – if he feels too restricted, if the cuffs don’t feel quite right – it can upset him, so the new shirt was a staple for several weeks prior to the party to ensure it wasn’t new, wouldn’t cause him any distress and he’d be 100% comfortable in it on the day (and look pretty damn awesome, obvs).

We had arranged for any gifts to be packed safely away in the venue – Franklin opens birthday presents one or two a day, for a good week or so after his birthday (or should I say his sister takes great pleasure in doing it for him, he isn’t the least bit interested in presents and the process overwhelms him)

What worked for us:

Franklin’s party was a triumph. It far exceeded any expectations I had. He had a fabulous time climbing up and down the stairs, over and over and over again. He didn’t eat much but he nibbled a few crisps and he lined up a full row of fairy cakes in front of him (that’s my boy!) and there wasn’t a meltdown in sight. His little face when we sang Happy Birthday to him was worth ALL the hours of preparation. 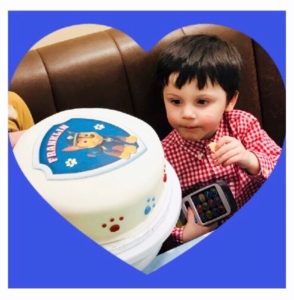 Now my thoughts are firmly fixed on 5!!